Press Statement By DAP Secretary-General And MP For Bagan Lim Guan Eng In Kuala Lumpur On 29.1.13.

Tan Sri Abdul Gani Patail’s Assurances That Action Will Be taken On Any Report Or Resolution By the Royal Commission of Inquiry (RCI) on Illegal Immigrants in Sabah Is Meaningless When He Had Failed To Act Against Perkasa For Calling For Bible Burning And Establish The IPCMC Recommended By RCI On Police.

Attorney-General Tan Sri Abdul Gani Patail’s assurances that action will be taken on any report or resolution by the Royal Commission of Inquiry (RCI) on Illegal Immigrants in Sabah is meaningless when he had failed to act against Perkasa for calling for Bible burning and establish the Police Complaints and Misconduct Commission or IPCMC recommended by RCI on Police. Abdul Gani has shown a troubling propensity of cowardly inaction on cases which involved BN leaders, their cronies or closet supporters.

END_OF_DOCUMENT_TOKEN_TO_BE_REPLACED

The Penang state government records its appreciation to the Penang police and Majlis Perbandaran Seberang Perai or MPSP enforcement personnel for taking the necessary steps to frighten the extremists from carrying out their plans for a Bible burning festival in Dewan Ahmad Badawi in Butterworth yesterday. We also thank the people from both in Penang and Malaysia as well as outside Malaysia from both Muslims and non-Muslims for their prayers and support against such a vile and abhorrent act.

The failure of the Bible burning fest in Penang sends a strong message for mutual respect amongst different faiths, peace and harmony to the extremists who want not only to burn the bible but to burn down Malaysia. The Penang state government urges Attorney-General Tan Sri Abdul Gani Patail to stop appeasing Perkasa but take action against its leaders for calling for the Bible to be burnt, that has brought us international shame.

END_OF_DOCUMENT_TOKEN_TO_BE_REPLACED

Principles Not Hate, Policies Not Sentiments And Performance Not Violence Will Determine Whether Malaysia Succeed In Transforming Itself Into A Developed And Progressive Country.

DAP welcomes the lifting of the four-year ban on the Hindu Rights Action Force (Hindraf) by the BN Federal government rescinding the Section 5 order under the Societies Act 1966 issued on October 14, 2008, which had gazetted the Hindraf as an illegal organization. The BN government should show its remorse and sincerity by not only apologizing for this ban but also pay compensation and withdraw all cases against Hindraf and 54 of its members for being part of an illegal organisation.

END_OF_DOCUMENT_TOKEN_TO_BE_REPLACED

The Future Of Penang Shall Be Written With The Same Commitment Towards Justice, Truth Freedom And Righteousness.

Malaysia is unique in that Islam is the religion of the country but there is freedom of religion for other faiths. For the last 227 years, Penang symbolises the ability for diverse cultures and faiths to absorb and celebrate these differences in peace, mutual respect and harmony.

END_OF_DOCUMENT_TOKEN_TO_BE_REPLACED

Press Statement By DAP Secretary-General And MP For Bagan Lim Guan Eng In Kuala Lumpur On 24.1.13

Cabinet should repudiate the irresponsible and unprofessional remarks by Attorney-General Tan Sri Abdul Gani Patail that no action will be taken against Perkasa President Datuk Ibrahim Ali, for making the repulsive statement that the Malay version of the Bible be burned, with the flimsy excuse that the Bible had not yet been burned so where is the crime. Is the Attorney-General going to willingly let the Bible be burned first then only will he take action?

Has he not failed to do his duty to stop wrongful acts from happening?. Cabinet’s should direct Tan Sri Abdul Gani to act against Ibrahim Ali in the same manner they prosecuted DAP National Chair Karpal Singh for sedition to prove that there is no double-standards but respect for equality of the law in an impartial and fair manner. By failing to do so, Cabinet shows that it condones the Attorney-General’s refusal to act because BN continues to support Perkasa as a BN-friendly organization.

END_OF_DOCUMENT_TOKEN_TO_BE_REPLACED

The PR Penang state government shall not engage with BN’s destructive politics of lies but focus on real challenges of strengthening peace and harmony amongst Penangites in taking a united stand in the face of extreme religious and racial provocations. Perkasa had issued an inflammatory threat to burn the Bible in their annual general meeting opened by former UMNO President Tun Dr Mahathir Mohamad, which was then followed by a pamphlet distributed by unknown parties calling for a Bible burning festival this Sunday in Butterworth.

END_OF_DOCUMENT_TOKEN_TO_BE_REPLACED

At its meeting yesterday, the Penang State EXCO expresses grave concern at a police report lodged by Rev John Kennady of the St Marks Anglican Church at the Butterworth police station against an anonymous pamphlet notifying that there would be a “festival” to burn Bahasa Malaysia version of the Bible this Sunday at 10 am. The notice left in the church’s letterbox, had invited the public to burn the Malay version of the Bible in front of Dewan Ahmad Badawi at the Bagan Luar municipality field in Butterworth.

The Penang state government unreservedly condemns such provocative, irresponsible and dangerous attempts to burn the Malay version of the Bible, which would also burn down the country with hatred and religious intolerance. The Penang state government urges Minister of Home Affairs Datuk Seri Hishamuddin Tun Hussein Onn to impose stringent measures to prevent such abhorrent and vile acts that would endanger national harmony and heighten religious tensions.

END_OF_DOCUMENT_TOKEN_TO_BE_REPLACED 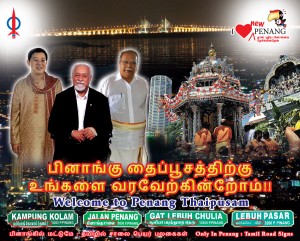 Let The Penang Hindu Endowment Board Be The Model Not Only For Indians In Other States But Also Other Marginalised Communities Such As Orang Asli, Ibans And Kadazans On How Good Governance And Integrity Can Improve Their Lives And Dignity.

The celebration of this year’s Thai Ponggal Festival at the new Hindu Endowment Board office marks another proud chapter in the development of recognition of the contributions and dignity of the Hindu community in Penang. As Thai Ponggal marks a new beginning, this new building renovated at a cost of nearly RM300,000 that marks a new beginning on how the Hindu community can prove how it can provide self-governance and manage it affairs well.

END_OF_DOCUMENT_TOKEN_TO_BE_REPLACED

Following the shocking comments by Datuk Dr Nik Zamri the consultant of the so-called RM75 billion mixed development project in Balik Pulau, the state government hereby states that it will not even consider nor evaluate it even if they get approval from the Federal government or endorsement from the NGOs. The Penang state government wishes to emphasize that this so-called project simply does not exist as it has not even been evaluated much less approved.

The Penang state government had stated that this so-called project would only be evaluated upon getting approval from the Federal government. The consultant’s comments in the Malay Mail today is untrue in saying that this is not the actual position of the state government as it is intended to divert attention as the general election is around the corner.

END_OF_DOCUMENT_TOKEN_TO_BE_REPLACED

The Indian Community Has Given BN 56 Years To Build A House And The Time Has Come To Change To Allow PR To Do What Is Right Based On Integrity, Justice And Good Governance.
In celebrating a new beginning under Ponggal Festival, the time has come to change to the new way of governance by doing what is right for the people instead of doing right for oneself. Prime Minister Datuk Seri Najib Razak has asked the Indian community to give the Barisan Nasional (BN) a new mandate and time to resolve their problems by stating that when we build a house, it will take time.

This is shocking admission of failure as the Indian community has given BN 56 years and by Najib’s own admission, we have only seen the frames. If Najib is sincere, he should first explain why BN failed to complete building the house even though every opportunity has been given during these 56 years.

END_OF_DOCUMENT_TOKEN_TO_BE_REPLACED

Press Statement By DAP Secretary-General Lim Guan Eng And MP For Bagan In Kuala Lumpur on 13.1.2013.

DAP is saddened by the announcement made by DAP Sarawak Chair and Sibu MP Wong Ho Leng that he is suffering from brain tumour. DAP expresses support for Wong as he seeks treatment and shares his confidence of full recovery.

DAP endorses and appreciates Wong’s assurances that he will not retire from politics but continue to be closely involved in the next general election. Clearly, Wong’s positive belief at his full recovery and level of commitment to the party should inspire DAP members and leaders to share the same courage and sense of responsibility.

END_OF_DOCUMENT_TOKEN_TO_BE_REPLACED

Press Statement By DAP Secretary-General Lim Guan Eng And MP For Bagan In Kuala Lumpur on 8.1.2013.

DAP demands that Umno supreme council member and Deputy Education Minister Dr Mohd Puad Zarkashi show proof or else withdraw and apologise for his lies that DAP is printing an astonishing 100,000 Bahasa Malaysia copies of the Bible using the word “Allah”. Mohd Puad’s lies are insane and without any basis whatsoever.

Mohd Puad’s lies are insane because DAP has never been involved in religion believing that religion is a matter of personal faith for the individual that should neither be exploited nor politicised. Further DAP has neither the resources nor the ability to afford to print and distribute 100,000 copies of a Bahasa Malaysia bible. Unfortunately these insane lies by an UMNO leader was also printed in all UMNO controlled newspapers in New Straits Times, Berita Harian and Utusan Malaysia.

END_OF_DOCUMENT_TOKEN_TO_BE_REPLACED

Press Statement By DAP Secretary-General Lim Guan Eng And MP For Bagan In Kuala Lumpur on 7.1.2013.

DAP calls on the BN Federal government to be serious about its Economic Transformation Programme’s goal to generate human capital formation following its flip flop in the RM200 smartphone rebate scheme costing RM300 million and double-standards in implementing the 15% flat tax rate under the Returning Experts Programme(REP) but not enjoyed by local experts with similar skill-sets. The RM 200 smartphone rebate can only achieve its purpose of increasing mobile internet usage amongst the young if it is accompanied by the provision of free wifi services in all public places throughout Malaysia whether in cities or towns, in villages or estates.

The Prime Minister announcement in last year’s Budget in September, that Malaysians between 21 and 30 who earned under RM3,000 a month could get a rebate of RM200 on handphones for smartphones costing less than RM500, did not fully fulfil its objective of helping the young who can not afford to buy a smartphone. The BN Federal government was forced to flip-flop and remove the RM500 price cap to ensure that it will not deprive lower-income youths of this privilege.