END_OF_DOCUMENT_TOKEN_TO_BE_REPLACED

DAP is shocked at the revelations by UEM Group MD Datuk Izzaddin Idris that toll highway operator PLUS Expressways Bhd could be compensated as much as RM5 billion by the Federal government over the next five years for not raising toll rates. Clearly freezing toll rates is meaningless as the people still has to pay through compensation payments by the government.

Worse, the government still owes PLUS RM 2.5 billion making the total compensation amount to be paid for the next 5 years a total of RM 7.5 billion! In fact, PLUS would be pleased to be compensated as they would be paid money without having to work for it.

Nationalization is necessary when toll concession operators like PLUS have not only recouped their investment and construction costs but also maintenance costs and are earning pure profits from toll rates revenue collected. Failure to do so will not only create an unbearable financial burden to the people but also strain our country’s finances for the foreseeable future.

The principal negative impact is that compensating PLUS RM 5 billion for the next 5 years for freezing toll rates will only increase both Federal government debt and debt service charges to even more unhealthy levels. According to the Ministry of Finance Economic Report 2010/2011, the total federal government debt would soar by 12.6% from RM 362.4 billion in 2009 to RM 408.2 billion in 2010. This works out to RM 15,118 in debt for each of the 27 million Malaysians as at 2010.

In other words for every Malaysian born, he or she will be immediately in debt of RM 15,118. If we take into account paying an extra RM 1 billion every year to PLUS, it is an expense and a debt burden that the country can ill-afford.(see following table)

Total investment For Penang Now Ranked #3 In Malaysia’s With RM 2.25 Billion An Increase Of RM 717 Million Or Nearly 50% In A Month Compared To 2010 First Half Of RM1.5 Billion

Penang’s total investment for Penang has surged from RM 1.53 billion for the first six months of the year to RM RM2.25 billion as at July 2010. In other words for the month of July alone, there was an increase of RM 716 million of investment or an increase of nearly 50% in one month as compared to the total investments for the first six months of the year. Penang’s performance for the first 7 months until July 2010 of RM 2.25 billion is higher than the RM2.17 billion achieved for the whole of 2009.

This is based on Malaysian Industrial Development Authority’s(MIDA) website today at www.mida.gov.my Based on the latest MIDA Statistics for proposed capital investments in Malaysia, Penang has been successful in securing RM 2.25 Billion for the period of January till July 2010. Of this amount, RM738 million was secured from domestic investments while RM1.51 Billion of foreign investments were secured. 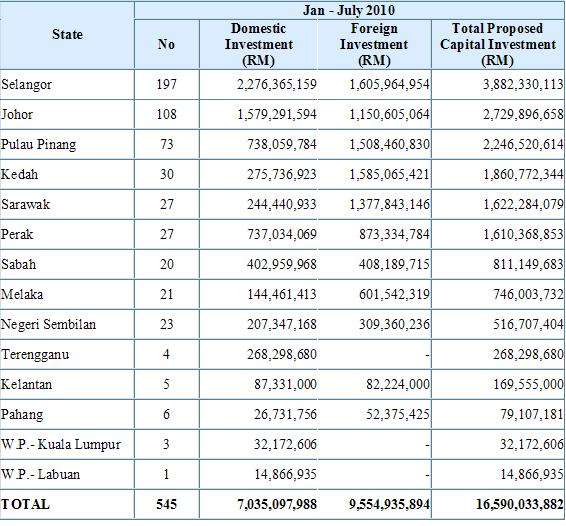 With this latest investment figure, Penang is now ranked #3 behind Johor and Selangor in terms of Malaysia’s proposed capital investments. This compares to Penang’s position as at June 2010 when Penang was ranked No. 5 at RM 1.53 billion. The state government records our appreciation to relevant state agencies such as InvestPenang, Penang Development Corporation, both the local councils and Federal agencies such as MIDA that have played a role in ensuring that Penang remains competitive.

Investors continue to make Penang their choice of location for investment due to 7 key factors:

Despite this encouraging improvement, Penang is still half way from this year’s target of RM 4.2 billion. The state government will gain motivation from this latest performance to redouble our efforts to achieve our target of RM4.2 billion for 2010 which is double last year’s investment figures of RM 2.1 billion.

BALANCED development with optimal growth, human talent and innovation and establishing an intelligent city for Penang are the three main objectives beng pursued by the state government in its endeavour to put Penang on the international map.

Chief Minister Lim Guan Eng outlined these fundamentals which he says are vital for Penang to forge ahead as an international city — a habitat of choice for all.

“What is the concept of growth? Economic growth cannot be balanced and you must follow its natural growth patterns as part of a natural phenomena. You have to go along with the stream so that you can maximise growth rather than try to go upstream,” he said.
END_OF_DOCUMENT_TOKEN_TO_BE_REPLACED

In March 2008, Pakatan Rakyat was swept to power in Penang by the political tsunami of the 12th general election. For the PR state government led by DAP’s secretary-general Lim Guan Eng, it was sink or swim. Today, just over 30 months later, many observers would say that the PR has come a long way.

But as Lim would tell you, the going has not been easy — he and his team of PR leaders have had their fair share of brickbats regardless of which corner they turned.

Every action or decision by the state government has come under close scrutiny. Some decisions have even prompted certain groups to take to the streets to demonstrate. Besides governing, Lim and his team have also had to deflect allegations — many of which have been racial and religious in nature — hurled at them.

The Edge Financial Daily caught up with the Chief Minister in between his busy schedule at his office at Komtar recently to talk about his expectations and plans for Penang. The following is an excerpt of the interview.
END_OF_DOCUMENT_TOKEN_TO_BE_REPLACED

I wish to congratulate the DAP FT State Ordinary Convention for holding its first ever meeting for the new DAP Headquarters. This is a new beginning for DAP and we hope also the promise of a better future for all Malaysians.

Malaysians have been stuck in the past far too long with primitive thinking of racial supremacy, tolerance of corruption and hostility towards democracy and freedom. Instead of focusing our resources on how to move forward, we are dissipating our energies by protecting civil servants and school principals that calls the Chinese prostitutes, mata sepet and balik China or the Indians beggars, si botol kicap and even dogs. We do not pay our civil servants to insult and denigrate us but to give us good service. How do we reward good if we do not punish bad?

47 years after the formation of Malaysia the time has come for Malaysians from Peninsular Malaya, Sabah and Sarawak to embrace the future. Malaysians can embrace the future of prosperity for all by practicing good governance, balanced development, integrity, shared society and a culture of innovation.

END_OF_DOCUMENT_TOKEN_TO_BE_REPLACED

The Penang state government proposes a revival of Adelaide Week in Penang and Penang Week in Adelaide to strengthen city sister ties between both cities that is bonded by blood, tested by time and driven by shared values. Medan was the first sister city for Penang. As Adelaide was our second sister, established far back in December 1973, there is no reason for allowing what was once a close relationship to lapse and wither away.

This is the reason why the Penang state government has led a high-level delegation to reconnect with Adelaide and link again our two peoples not just based on trade, tourism, education but also our common heritage. Both Penang and Adelaide share the same forbears. Captain Francis Light founded Penang in 1786 whilst his son, Colonel William Light, founded Adelaide exactly 50 years later. Colonel William Light’s mother is a native Malay and it is this cultural ties that bonds our people by blood.
END_OF_DOCUMENT_TOKEN_TO_BE_REPLACED