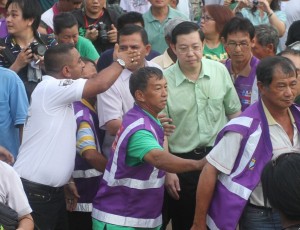 END_OF_DOCUMENT_TOKEN_TO_BE_REPLACED

On June 24, last year, we added another milestone to Penang’s achievements when Bosch Solar announced their decision to invest in a fully integrated crystalline photovoltaic plant at Batu Kawan. Today’s signing ceremony of the sales & purchase agreement with Penang Development Corporation denotes Bosch’s commitment to its investments in a PV plant in Penang.

Bosch Solar’s 520 million euro (approximately RM2.2 billion) investment in Penang is expected to generate 2000 new jobs in various aspects of crystalline PV production. The Penang facility is envisaged to grow by 30% in the coming years as the facility will adopt and implement state-of-the-art cell technologies coupled with enhanced production processes.

END_OF_DOCUMENT_TOKEN_TO_BE_REPLACED

Prime Minister Dato’ Sri Najib Tun Razak has revealed that the BN Government is playing games with the people and is clearly not sincere about reforms by saying that he will grant more power to the Malaysian Anti-Corruption Commission (MACC) if BN wins a two-thirds majority in the coming General Election. The Prime Minister should stop playing general election games but prove his sincerity about fighting corruption by publicly declaring the assets of cabinet members and amend the Federal Consitution now to reform the MACC as PR would support BN to secure the necessary 2/3 majority

According to news reports yesterday, Najib said that constitutional amendments are required to form an anti-corruption Service Commission with the power to appoint and sack members of the MACC. Currently, MACC officers are appointed via the public services commission. He then added that BN will only carry out the necessary amendments if they win two-thirds in the next GE.

END_OF_DOCUMENT_TOKEN_TO_BE_REPLACED

Following Violent Threats By Their Members, UMNO and Perkasa Personally Responsible If Anything Happens To Me.

On 26 February 2012, I arrived at 6.30 pm in Padang Kota Lama to attend a Himpunan Hijau 2.0 event organised by a Penang NGO Suaram to object to the Lynas rare earth processing plant in Kuantan. Before my arrival, Penang Senior EXCO member YB Chow Kon Yeow who was there at 6 pm, had informed me by phone of disruption of the peaceful rally by UMNO and Perkasa members.

END_OF_DOCUMENT_TOKEN_TO_BE_REPLACED

The careless incident in Afghanistan in which copies of the Holy Quran had been inadvertently sent to a garbage burn pit at a US Army camp and subsequently incinerated is an unacceptable act of desecration and dishonour towards the religion of Islam.

DAP deeply regrets such an insensitive action that should never have occurred in the first place.

END_OF_DOCUMENT_TOKEN_TO_BE_REPLACED

Penang And Selangor Emerging As The Top Two Manufacturing Investment Location Of Choice In Malaysia For 2011 With RM9.1 Billion And RM8.7 Billion Respectively Proves That PR Can provide Clean And Good Governance That Inspires Confidence From Investors.

Penang and Selangor emerging as the top two manufacturing investment location of choice in Malaysia for 2011 with RM 9.1 billion and RM 8.7 billion respectively proves that PR can provide clean and good governance that inspires confidence from investors. This is the second time that Penang has come out as No. 1 in manufacturing investment as in 2010 Penang emerged as top for the first time in history drawing RM12.2 billion in investments.

END_OF_DOCUMENT_TOKEN_TO_BE_REPLACED

Selangor MCA’s police report against me yesterday only highlights MCA’s desperation to cover up MCA President Chua Soi Lek’s performance of making personal attacks, lies and divisive tactics during the
historic Mandarin debate on 18.2.2012 “Is The 2-party system becoming a 2-race system”? Making another 10 or 100 police reports against me by Selangor MCA can not hide the fact that Chua has so far refused to
release his own debate transcripts in Bahasa Malaysia and English.

Chua Soi Lek’s refusal to release his own debate transcript in Bahasa Malaysia and English will only prove to non-Chinese speaking Malaysians that he focused on making personal attacks, lies and adopted divisive tactics during the historic Mandarin. Not only did Chua made personal attacks against me during the historic debate on 18.2.2012, even his predecessor Datuk Seri Ong Tee Keat was also not spared.

END_OF_DOCUMENT_TOKEN_TO_BE_REPLACED

FULL TRANSCRIPT in BM of the debate between Lim Guan Eng and Chua Soi Lek(MCA’s President) on 18 Feb 2012 in Kuala Lumpur on the topic “Is the two-party system becoming a two-race system?”

END_OF_DOCUMENT_TOKEN_TO_BE_REPLACED

1.6 Million Penangites Deserve Full Credit For The Historic Feat Of Penang Being No. 1 In Malaysia In Manufacturing Investment For The 2nd Consecutive Year In 2011.

The Penang PR state government congratulates 1.6 million Penangites who deserve full credit for the historic feat of making Penang No.1 in Malaysia in manufacturing investment for the 2nd consecutive year in 2011. This is a marvellous and incredible achievement for the second smallest state in Malaysia without any natural resources.

END_OF_DOCUMENT_TOKEN_TO_BE_REPLACED

It should now be crystal clear to the Malaysian people that the Prime Minister, Dato’ Seri Najib Tun Razak, as well as his Barisan Nasional Government, are open backers of the ultra-nationalist and racist movement, which masquerades as a non-governmental organisation (NGO) in order to disguise its Government backing.

Last month, the Prime Minister told the country that the Barisan Nasional had nothing to do with Perkasa’s distribution of “white packets”, traditionally used for Chinese funerals, on Chinese New Year. But at Saturday’s event, the Perkasa leader, Datuk Ibrahim Ali, again reiterated that Perkasa would always support Najib and his administration’s policies, and even said that he was “in awe of Rosmah’s leadership”.

END_OF_DOCUMENT_TOKEN_TO_BE_REPLACED

C.P. Scott’s famous dictum of “Comment is free, but facts are sacred’ bears reminder in The Star’s coverage of the Mandarin debate yesterday between MCA President Datuk Seri Dr Chua and myself.

END_OF_DOCUMENT_TOKEN_TO_BE_REPLACED

The provision of public health care in Malaysia need not be completely overhauled but merely revamped to improve it towards excellence. The DAP believes ensuring the proper allocation of funds without any leakages or hanky panky can not only ensure the public’s right to provision of a standard health care but also improve public health delivery.

The DAP calls for the Prime Minister Datuk Seri Najib Minister to intervene and scrap 1Care for 1Malaysia proposal following the failure of of Health Minister Datuk Seri Liow Tiong Lai, to fully examine the adverse consequences of this compulsory Health Insurance scheme. In replacement, the Ministry of Health should conduct a thorough public consultation process involving key stakeholders to ensure that the provision of basic healthcare as a public good and human right is protected and not auctioned off so that well connected individuals and companies can profit from the people.

END_OF_DOCUMENT_TOKEN_TO_BE_REPLACED

Facts Are Facts Which Can Not Be Changed By Lies:-Would UMNO Leaders Datuk Zainal Abidin Osman And Datuk Abdul Rahman Datuk Dahlan Accept My Challenge That They Retire From Politics If They Fail To Prove That The Bayan Mutiara Land Sale Was Not Done By Open Tender?

UMNO leaders have systematically carried out a vicious campaign of lies against the Penang state government on the sale of Bayan Mutiara land in 2010 by open competitive tender at RM 240 per square feet or total sale price of RM1.07 billion. Amongst the lies raised by UMNO Penang Chairman Datuk Zainal Abidin Osman and Kota Belud MP Datuk Abdul Rahman Datuk Dahlan was that there was no open tender; the selling price was sold to a private developer at 50% lower than the market value of RM 420 per square feet; and that the Penang state government had insulted local Malaysians by appointing HDB Singapore as a consultant for the state government’s massive affordable housing project in Batu Kawan.

END_OF_DOCUMENT_TOKEN_TO_BE_REPLACED

It was reported yesterday that former Petronas CEO Tan Sri Hassan Marican is set to be appointed chairman of Singapore Power Limited (SP) in June succeeding Ng Kee Choe who is retiring. Tan Sri Hassan left our national oil company in 2010 allegedly due to friction with the current administration, and has since been appointed as director in a number of foreign firms such as Singapore government-linked companies SembCorp Industries Ltd, SembCorp Marine Ltd and Singapore Power. He is also a director at Sarawak Energy Bhd and US oil and gas giant Conoco Philips.

It would appear that Tan Sri Hassan is internationally appreciated and highly sought after by big multinational corporations but not at home. This is extremely sad,especially when Tan Sri Hassan is widely credited as the man who turned Petronas into the leading international oil and gas company that it is today.