Penang Chief Minister Lim Guan Eng in his capacity as Penang Development Corporation(PDC) Board Chairman has directed PDC to reveal the chronology of events relating to the proposed privatization of operations in the Bukit Jambul Country Club(BJCC). BJCC is run by Island Golf Properties Bhd(IGP), a PDC owned subsidiary company. Bayan Baru MP Dato Seri Zahrain has been the Chairman and Director of Island Golf Properties Bhd since 9th July 2008. Information supplied from PDC is as follows:-

OUTSOURCING OF MANAGEMENT AND OPERATIONS OF BJCC:
CHRONOLOGY OF EVENTS 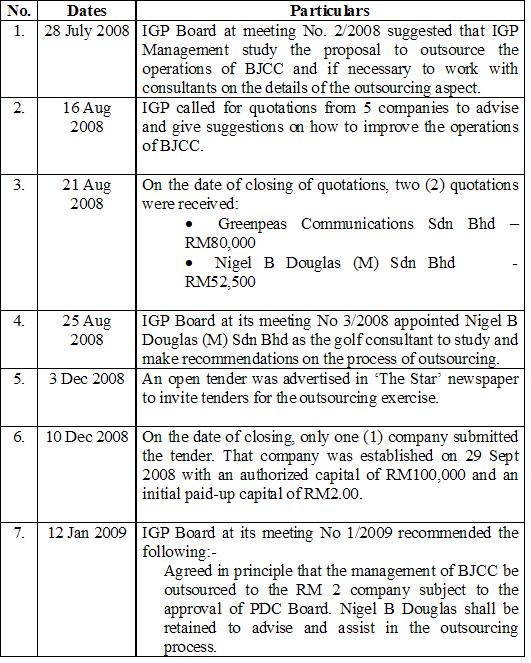 The Chief Minister had based his recommendation for fresh tenders for the management of BJCC on two important reasons. One, to allow a RM 2 private company to win the tender for running BJCC, that involves expenditure of tens of millions of ringgit, would make a mockery of the meaning of open tender system. Two, the RM 2 company had no track record of running a golf club and was established on 29 Sept 2008, clearly with the sole intended purpose of bidding for the tenders.

The Chief Minister has refused to heed requests to follow the recommendation of the IGP to select the RM 2 company. Instead he had insisted that a fresh tender must be held in line with the CAT governance of competency, accountability and transparency. The fresh tender exercise was carried out with 7 proposed tenders received. The tender award is in the process of being finalized and will be decided by the full PDC Board meeting on 9.2.2010.

2 thoughts on “OUTSOURCING OF MANAGEMENT AND OPERATIONS OF BJCC”