Today is a special occasion where the global community celebrates the 60th anniversary of the United Nations’ Universal Declaration of Human Rights.

Unfortunately for us in Malaysia, despite claiming to be a progressive and advanced society, we are still lagging behind in protecting and upholding human rights. After more than 50 years of independence, human rights are mere lip service offered by the Barisan Nasional government.

Recent events, particularly after the historic political tsunami of March 8, have shown that the authorities lack of respect for human rights. Selective prosecutions and persecutions are still being enforced despite the end of Mahathir era.

For us in DAP, we have seen our Member of Parliament Teresa Kok detained under the draconian Internal Security Act recently. Despite her release, it shows a symptom of blatant human rights abuse. Many more DAP leaders have paid the price for speaking the truth. I too have been the victim of the BN government, detained under the ISA and sent to jail with a politically motivated charge.

We have seen a journalist – Sin Chew Daily’s Tan Hoon Cheng – detained under the ISA for doing her job as a reporter, a well-known blogger – Raja Petra Kamaruddin – who was also detained for expressing his views. Both of them have been released too but again, it was abuse of power by the authorities. Many more are still suffering under the ISA – the HINDRAF Five and many others including Muslims who are deemed to be against the government, and until today, no one has been put to trial.

The Penans in Sarawak too have suffered gross human rights abuse. I congratulate Suaram for their efforts in highlighting the plight of the Penans as well as exposing abuses by the authorities against Malaysians in general. But more have to be done in our struggle to promote human rights and freedom.

The mass media are still under the thumb of the government, and some newspapers and TV news which are blatantly promoting racism are allowed to tarnish the good image of concerned citizens. We in DAP have suffered much due to this racial slurs without any proper protection under the laws that were supposed to defend human rights.

Besides controlling the media through repressive laws and curbing press freedom, the BN government is also guilty of book banning, without ever stating the reasons for such anti-freedom act. In the 21st century, our federal government is still fearful of its own people enjoying freedom.

As recent as a few days ago, some members of the Jaringan Rakyat Tertindas (JERIT) and Sungai Siput MP Dr D Jeyakumar were arrested by the police while campaigning to promote human rights. JERIT members were merely cycling around the peninsular to hand over memorandum to state leaders including myself as Penang Chief Minister. Yet the police acted against them. Where is protection of human rights in this country?

Sixty years of the Universal Declaration of Human Rights and 50 years of Merdeka, we still see the abuses of human rights in this country. 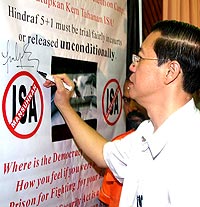 We will not give up. Some may say that we are repeating the same demand. Yes, we do. Until and unless the ISA and other laws that allow detention without trial are abolished, we will continue to make the same call, over and over again.

Until the people feel safe that there will no abuse of powers by the authorities and there will be a serious enforcement of laws that promote human rights and freedom, we will continue to speak up our mind. In more than 40 years of existence, DAP has always and will continue to fight against abuses of human rights. Many of our leaders have suffered a great deal but we will never give up.

The March 8 mandate was meant for abuses of human rights to end. It also means that the BN government must do away with its autocratic past or else, face the wrath of the people in the next elections. Malaysian of all races and religions should unite in this fight for freedom to ensure protection from abuses.

With this year’s Universal Declaration of Human Rights’ theme dignity and justice for all of us, our message to the BN government is simple – for a start, abolish ISA now!