Parliamentary Speech By DAP Secretary-General And MP For Bagan Lim Guan Eng During The Second Reading Of The Sedition(Amendment) Act 2015 In Dewan Rakyat On 9 April 2015.

DAP strongly objects and condemns the proposed amendments to the 1948 Sedition Act, because the harsh strengthening of the repugnant laws is a historic act of national betrayal by the Prime Minister and the BN Government that launches 10 oppressive attacks against 30 million Malaysians. Instead of fulfilling his promise first made on the eve of Malaysia Day 2011 and repeated it twice(on July 2012 and after the 13th General Election on 2 July 2013 during an BBC interview), Prime Minister Datuk Seri Najib Tun Razak has chosen to dishonour it by breaking his word to repeal the Sedition Act.

The Prime Minister did not even apologise publicly or seem contrite for breaking his promise to repeal the Sedition Act made 3 times. We hold the Prime Minister and BN parties personally responsible for this historic act of national betrayal to their principles, to their own promises, to the upholding of parliamentary democracy and most important of all to the people of Malaysia. Worse, the BN Federal government is now trying to accumulate and amass greater and wider oppressive and arbitrary powers with these repugnant amendments.

The famous American President Abraham Lincoln was supposed to have said, “Nearly all men can stand adversity, but if you want to test a man’s character, give him power.” Malaysians realise now the true character of the BN parties that hold power at the Federal government level. Whilst the 52% will feel justified for not supporting BN, the 48% will question what is the worth of a government that does not keep its promises?

Malaysians from Sabah and Sarawak will also feel betrayed if their right to question whether the failure of BN to abide and adhere to the terms, conditions and guaranteed rights for Sabahans and Sarawakians in establishing Malaysia based on the 1963 Federal Constitution would also give rise to questions of the right to secede is now considered seditious. After all Sabahans and Sarawkians may ask why can’t they raise such question when the BN Federal government betrays their promises guaranteed in the 1963 Malaysia Federal Constitution.

If so, then why is the BN government also not making it a seditious offence for those who fail to abide and adhere to these terms for Sabah and Sarawak agreed to in forming Malaysia or those who fail to respect the inalienable rights of Sabahans and Sarawakians? My colleague from Kuching will expand on this in his speech later.

2. Attack on freedom of the press, especially the online media. Clearly the amendments permit the BN government to extend its tentacles to silence and stifle the free voices in the online media, just as have they have controlled and manipulated the mainstream media;

3. Attack on the rule of law where lawyers say there was still no clarity of what amounts to “seditious tendency” in Section 3(1), but there was now a new clause of seditious tendency that is vague. Further there is no justice when no consideration is given to a youthful or first time offender.

4. Attack on the judiciary where the fixing of a minimum sentence of 3 years imprisonment, is a gross interference with judicial discretion on sentencing. Further is the government not only disrespecting but also in contempt of the judiciary by making such amendments when it is sub judice as the issue is still pending decision by the Federal Court on whether the sedition law is constitutional.

5. Attack on parliament and the parliamentary process by delimiting the right of MPs and State Assemblymen to enjoy the right of legal immunity of anything said in the House by even prosecuting for sedition the Penang DAP ADUN for Sri Delima, YB RSN Rayer when he attacked UMNO in the Penang State Assembly. Further, BN has treated Parliament as a mere rubberstamp by bulldozing bills in the early hours of the morning and only giving short notice of less than 2 days for such an important amendment bill.

6. Attack on honourable and noble conduct of keeping one’s word and promises, especially government leaders. Failure to keep one’s promises gives politicians a bad name, if even the Prime Minister can do it without any regret.

7. Attack on Malaysia’s role in the United Nations Human Rights Council, of which Malaysia is a member. Malaysia will become a laughing stock of being a member of a UN council promoting human rights when it is stamping out freedom of expression.

8. Attack on creativity and innovation which relies on the 3Ts of Talent, Technology and Tolerance of new ideas;

9. Attack on our future where our future generation will live in a climate of fear and silenced by fear. What difference will this future be from the box-office movie The Hunger Games, where sedition is also severely punished.

10. Attack on the opposition, which has been victimised by selective prosecution and double-standards where the enhancement of punishment under these amendments, will automatically disqualify a member of Parliament. So far 160 people have been arrested, from law professors to a cartoonist representing all sections of society! Amongst the list of DAP leaders, MPs and ADUNs charged or investigated under the Sedition Act are as follows(see attached)

BN had attempted but failed to categorise those who commit seditious offences as serious as murder by refusing to grant bail for so-called aggravated sedition. This is a travesty of justice that making a speech is as serious a criminal offence as murder. Why is corruption cases also not placed at the same level of not being granted bail?

There are now two Malaysias. We must not give up on our great Malaysian Dream – the promise in the Malaysian Federal Constitution offering justice, freedom, opportunity and equality. Or the other Malaysian nightmare of injustice, oppression, cronyism and discrimination.

By concentrating such powers on the Executive, the separation of powers is further undermined by emasculating the supremacy of Parliament and the independence of the Judiciary. Clearly those who seek to amass such power must be power-crazy, whether it is the Attorney-General or the police or the Home Minister.

DAP urges the Prime Minister and the BN government to return to sanity and calls for the Sedition Amendment Bill to be withdrawn, deferred or at least referred to a Parliamentary Select Committee. These amendments will only instil fear. Let our children live free, free from fear. 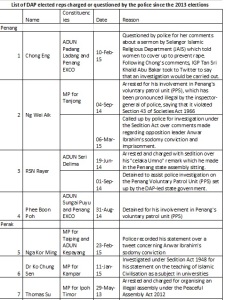 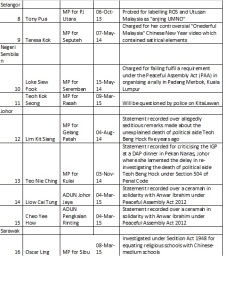