What is heartbreaking about the current economic crisis, caused by the collapse of key financial institutions in the West, is that the culprits are seldom the victims. This is one of the negative effects of globalization where abuses by those involved in the collapse of the western financial system can have dire consequences of deep financial distress, losses and sufferings to innocent people half a world away in Asia. Worse those involved often escaped unpunished and can go back to have their exorbitant bonuses.

There are 5 lessons to be learnt. Lesson One is this: Without transparency and accountability, arrogance takes over which invariably ends in disaster, for everyone.

The second lesson we have to learn is that it was we – the small developing nations – who made ourselves vulnerable. We failed to move out of the Middle-Income Trap, and forgot that we have to continue climbing the value-added ladder, high-technology and knowledge-intensive high-income economy in order to develop the skills level of our people.

In economic crisis as in boom times, the gap between the OECD and East Asia developing countries hovers around an average of 8.1% every year during these 4 years. This yawning gap in growth rates is the reason behind China’s astonishing leap within a generation past not only Germany but also Japan as the second largest economy in the world after US with the largest foreign reserves of USD 2.3 trillion.

However to say that the economic center of power now lies in Asia is untrue. In GNP per capita terms, Asia’s large population still puts Europe and US ahead. Despite having the 2nd largest economy China’s 2008 per capita income using purchasing power parity, was ranked 133th at a paltry USD 6,000, behind Turkmenistan, El Salvador and Namibia. In other words, what we are going to see is not a uni-polar world, whether centered in the West or East but a multi-polar world that leads to a more balanced economic order. 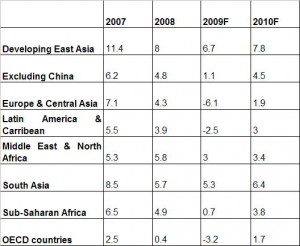 The fourth lesson, is the necessity to build for the future, not the present. We need each other: the West needs us as much as Asia needs them so that together we do not let our children down.

The fifth lesson we have had to learn – is to concentrate on basics at the local level. Economics, like politics, begins at home. Local economic innovations must take place. That is why we must invest in education, in tourism, in lifestyle enhancement, investing in regional ties rather than international ties.

In other words, we must think globally but act locally. There are 6 aspects of “Think Globally, Act Locally” for Penang to succeed in transforming itself as an international city, a knowledge-intensive and high-income economy.

One, openness not in economic terms but in pursuit of knowledge. This is characterised by a purposeful and determined willingness not to be bound by dogma but to learn from successful models combined with willingness to explore, experiment and progress through change.

Two, a people-centric approach through continuous emphasis and engagement with the people by emphasizing education over propaganda, competency over political background and excellence over indoctrination. There is no dispute that the energy, expertise and entrepreneurship of its people are the critical success factors of economic success. That is why Penang aspires to be the first wifi state in Malaysia that is provided free of charge.

Four, unbalanced growth must be compensated by the provision of development and social services that is inclusive – accessible, available and affordable to everyone. Efforts must be made to provide development services to those not touched by rapid economic growth.

Five, seeking new sources of growth such as a green economy. Green economy refers to a sustained growth model which features environment-friendly technologies, renewable energy resources and low carbon emissions. In Penang we aspire to be the first green state in Malaysia by reducing plastic bag compensation, implementing green buildings and finding alternatives such as manufacturing of bio-degradable food containers made from padi or sugar cane husks so organic that it can be eaten.

Six, a determined effort to branding as synonymous with quality, safety, sustainability reliability and integrity. Standards of service in all industry sectors, including good governance, must be at the highest level if we are to beat the competition. Penang’s CAT governance of Competency, Accountability and Transparency has achieved recognition from Transparency International in reducing corruption and inefficieny.

1 thought on “6 Aspects Of “Think Globally, Act Locally” For Penang To Succeed In Transforming Itself As An International City, A Knowledge-Intensive And High-Income Economy.”